A majority of Cisco Systems customers who buy optics from the company do so at a massive markup over the actual price. This is an open secret, which all customers know about and recently this has come to the notice of analysts and Cisco stockholders as well, who are understandably concerned about what this means for the company’s prospects. Indeed, Cisco has an established practice of reselling optical modules. This contributes to 25 percent of Cisco’s operating income. Cisco’s earnings fall once you take out the modules from which the company earns such a high markup.

These modules come in standard formats such as SFP and GBIC and connect linecards to optical fibers. Cisco purchases these modules from Finisar Corp. and other vendors and then re-sells them to their customers, at a big markup. Cisco’s big secret is that it adds nothing to these modules apart from basic identifying information. The company does not really consider reselling optical modules to be a part of its core business, which is, networks and routers. But this does generate a lot of money for Cisco, about $2.5 billion or so, which represents a sizable chunk of the company’s total revenue.

While Cisco’s officials don’t openly disclose their business model, this is something that is commonly known in the industry. But it’s not like Cisco is doing anything wrong or illegal here. It is perfectly entitled to extract the maximum value out of their brand. But the margins are so high – a gross profit of 90 percent. Most investors who analyse the Cisco stock believe that the company’s profits are because of the new technological innovations it comes out with every so often. That may be true, but the fact is, much of Cisco’s profits come from the high markup on optics. 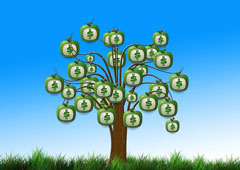 So when you take out the module markups from the company’s income, you will know that the profit growth over the last few years doesn’t really add up. That should certainly indicate that the Cisco stock is overvalued. The question to be asked is how does Cisco get away with reselling optics at such a high margin? For this, we have to go back to 2003, which Cisco changed its Internetwork Operating System (IOS), wherein it pointedly rejected the optical modules that were made by third-party vendors and not by themselves. So although these modules are standards-based and are supposed to be interchangeable, Cisco customers are required to buy the modules from Cisco alone.

Cisco’s way of doing this was to put identifying information on the memory chips within each module. This is called “copy protection” but Cisco refers to this practice as “Cisco Quality ID” and charges a premium for each of its optics. What Cisco really does is to buy the optics from other manufacturers from China and other Asian countries at a low cost and then sell them at a massive profit to its customers. So basically, multiple suppliers compete to sell to just one customer at a low price, Cisco, who then sells the same products at a much higher price to its customers. This is referred to as Monopsony. However, fortunately, this state of affairs is not going to persist for too long. There are a number of entrepreneurs in Asia and other parts of the world that are manufacturing identical versions of the standard Cisco-approved optics.

This has certainly cut into Cisco’s profits and has compelled the company to take note. So far Cisco has not filed any lawsuits against such third-party manufacturers and is unlikely to do so any time soon, as they are not doing anything that is against the law. In fact, these manufacturers are leveling the playing field for everyone and have made it possible for consumers to buy the optics at reasonable and realistic prices, not at the high prices charged by Cisco.