Each of these steps should be considered at the design stage itself. It is of particular importance that the control system should be efficiently designed and operated, in order to increase the working life of the data centre. If you are a data centre manager, you would know that the dynamics of the cooling system are not so easy to manage. First, you need to take care of the operating temperature of the IT room in various locations and also as a whole. This can fluctuate widely depending on various parameters. The temperatures at different locations should be properly monitored to ensure that the appropriate locations stay in place and the right action is taken so as to optimise the trade-off between the efficiency of the electrical system and the effectiveness of the cooling.

One of the most challenging aspects of this is to provide a quick and effective response to any localised increases in temperature. For example, consider the design of an air-cooled packaged chiller – If you were to increase the set point of the IT temperature as well as that of the chilled water, the chiller energy would get lower. That’s because the chiller efficiency would increase and second, because of the fact that the data centre is capable of operating in the economiser mode for much of the year. 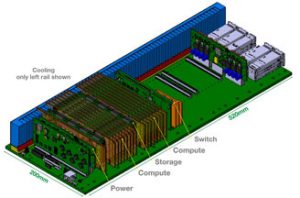 Now, support the CRAH or the computer room air handler supply air temperature is not raised in the same proportion as the chilled water temperature. That would reduce the cooling capacity of the CRAH, because of which the CRAH fans would need to spin more in order to make up for the loss. What this does is to increase the energy consumption of the CRAH. Another consequence is that there is an increase in the dry cooler energy level due to an increase in the number of economiser hours.

So, as you can see, there are many interdependent systems at work here, which operate in reaction to one another. This makes it hard to determine the effectiveness of each of the individual operations in the data centre that are meant to increase efficiency without first monitoring all parts of the system. A proper control system should hence consider all effects of any adjustments made to the cooling infrastructure on the installation of the system. This means any manual adjustments made to each of the individual elements are required to be superseded by a system of automatic controls.

So what can you expect from an effective control system? Such a system should optimise energy savings by switching between the various operational modes such as the partial economiser, full economiser and the mechanical mode automatically depending on the outside air temperatures and the IT load. It should effectively coordinate the indoor cooling device operations, such as the CRACs and CRAHs, to prevent any conflict on demand between the two. The humidity of the IT space should be controlled centrally by managing the dew point temperatures at the IT intakes. This is far cheaper and more efficient compared to managing the relative humidity at the cooling units. This shows that the most important factors involved in maintaining a proper cooling system are the ease of maintenance and the flexibility of the system.

One common methodology which is used to build an efficient cooling control system involves adopting a hierarchical approach to the system that works at the system level, device level, facility level and group level. Device-level control involves controlling each of the individual units of the system such as chillers. These controls are built by the vendors into the equipment itself. They work as a foundation for higher level control plans. Group level control involves coordination of many units of the same device type. This is done by the same equipment vendor and by using the same control algorithm. This provides for a better resolution of demand fighting and more effective co-ordination between the various units. The only issue with this kind of control is that it can only be used for the same types of devices, from the same vendor.

System-level control, which is at a higher level than group level control, is used to co-ordinate the working of different cooling subsystems of a data centre such as a CRAH and a pump. These control systems are more effective when you use equipment from the same vendor. Facility level control works as a more holistic control system for a large data centre. It integrates the various functions of a building into a common network. So everything within the building such as the heating, lighting, air conditioning and the ventilation as well as the security, power backup and fire-protection is taken care of by this control. This is the best co-ordinated and most efficient cooling strategy used to manage all operations of the data centre.