3 Reasons to Use Third-Party Optical Transceivers

If you have used optical transceivers in the past, you will know that they are highly effective and utilitarian pieces of network hardware. Most transceivers come with SFP/SFP+ ports, which make it possible for you to choose from a number of uplink types. This allows you to use any type of wiring available to you.

These devices are easy to use and hot-swappable. You only need to plug them into the system and start using them. But the drawback with many transceivers is that they are far too expensive. This should not be so, because apart from a few transceivers that are used specially for niche categories, most transceivers are mass produced, which means there is no reason for them to cost too much.

The reason they cost a lot is because the big brand networking companies that have them made at various manufacturing units, sell them at a much higher cost than they really are worth – this means big profits!  While it is understandable that a company wishes to make a profit, the excessively high markup on some networking products does raise a few eyebrows.

The benefits of compatible optical transceivers…

#1: They are perfectly compliant with internationally agreed-upon standards.

Third party optics are very much compliant with internationally agreed-upon standards, the same as those made by name brands. Remember, there are only a few facilities around the world that manufacture transceivers. They supply these devices to major companies such as HP and Cisco, as well as to third-parties. So the devices are pretty much the same, whether you buy from us, or from a name brand. All networking companies do is to add a code in the EEPROM of the transceivers that identifies their networking equipment. This is not a big problem to overcome with our devices; basically there is no difference whatsoever. 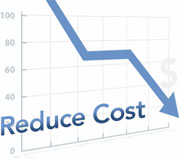 Third party optics cost much less compared to those made by major name brands. Indeed, optics made by name brands can cost 50% to 1000% more compared to those sold by third-parties. The question is, why would you buy something that costs $50 for hundreds of dollars. Yes, that’s exactly what you’re doing when you buy transceivers from name brands instead of from third parties.

#3: They come with a Lifetime warranty.

Not only are third party devices cheap, they come with a lifetime warranty. Compare this with name-brand transceivers which are not only more expensive, but also have shorter warranty periods, of anything from 90 days to 2 years. We provide lifetime warranty, and we also offer full replacement for the whole unit in case of a failure (which, by the way, is very rare.) That’s why you are advised to purchase transceivers made by third parties, which are 100 percent compatible with networking hardware made by major companies. There is absolutely no difference between the optical transceivers made by us and those made by big name-brands such as Cisco or HP.